Beeston Common is one of the many areas in North Norfolk that’s perfect for those who want to feel at one with nature. With each season welcoming a different array of flora and fauna, there’s always something beautiful to cast your eyes upon.

This special area is the larger part of the joint Beeston and Sheringham Commons, located just east of Sheringham. It covers 61 acres and has not changed in area since first mapped in 1797.

Francis Farrow, 67, has known the Common since childhood and has been helping to monitor and maintain it for the last twelve years as Honorary Warden.

“As I have experience in conservation, I advise the local Council on environmental matters. I get involved with many aspects of the Commons maintenance, such as scrub clearance, path mowing and pond management. I also lead walks around the Common and carry out wildlife monitoring.” 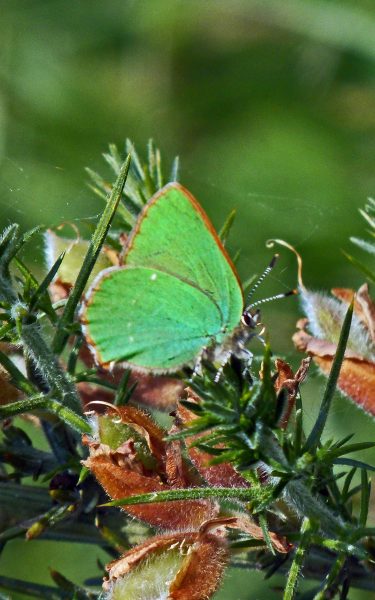 Beeston Common is a wildlife hotspot, thanks to its abundance of habitats.

“Beeston Common is a mosaic of different habitats, broadly covering grassland, heath, bog, fen, secondary woodland and freshwater ponds and streams. A variety of habitats in a small space is great for biodiversity, and new species are regularly sighted.”

This stunning landscape is home to species big and small, from the majestic Roe deer to beautiful butterflies.

“In the winter it’s possible to see species of wading birds like the woodcock and snipe. The spring is good for warblers, and the autumn sees many visiting thrushes and finches feeding on the various berried shrubs. Most years we see more than 26 species of butterfly, as well as 18 species of dragonfly, with the majority breeding onsite.”

An old WW2 pillbox stands proudly within the Common and is a great place for wildlife spotting. The pillbox has been modified to make a great observation platform for visitors. It’s also a hibernaculum, which provides a snug winter home for the local reptiles. 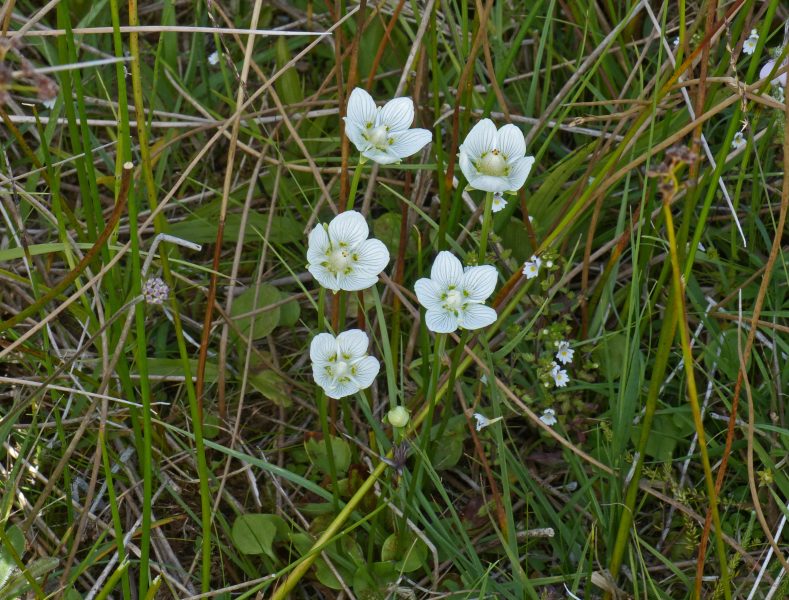 Pictured above: Grass of Parnassus

The vast variety of wildlife at Beeston Common is matched only by the impressive collection of flora that inhabits the landscape.

“Wild Orchids were once the Commons’ best asset, with 14 species recorded over time. With some damage to the wet areas caused by water abstraction and the loss of grazing in other areas, the orchid species has declined by half. Other specialist plants are doing well, such as the Round-leaved and Greater Sundews, Butterwort, Grass of Parnassus, Marsh Lousewort and Cross-leaved Heath. Overall, we have recorded around 400 flowering plants.” 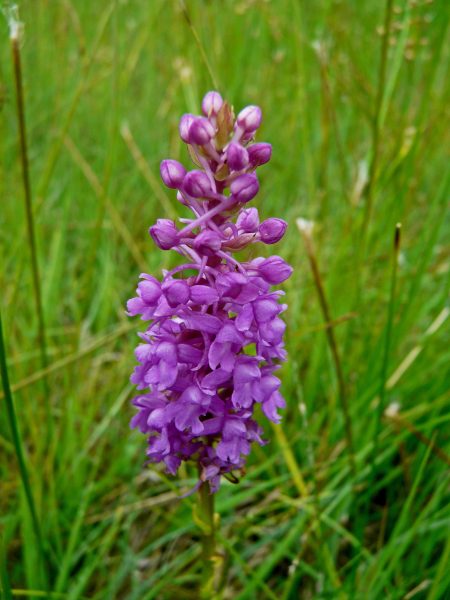 The Common is a Site of Special Scientific Interest (SSSI). Areas which need to be conserved or are home to rare species are awarded this status so that the landscape can be protected.

“The SSSI designation was due to the spring-fed wetland habitats and the associated flora, which make the area so interesting. The Beeston and Sheringham valleys are a part of the Norfolk Valley Fen Special Area of Conservation. These habitats are now very rare and under threat throughout Europe.”

The Common was once maintained using traditional methods but is now conserved by the local authorities, with Francis’ help.

“The Common was grazed by ponies up to the 1970’s, but after the ponies had left, the area became neglected and overgrown. In 1983, Sheringham Town Council helped organise a local conservation group, which went on to do major restoration work. This included the pond, marshes and heaths.” 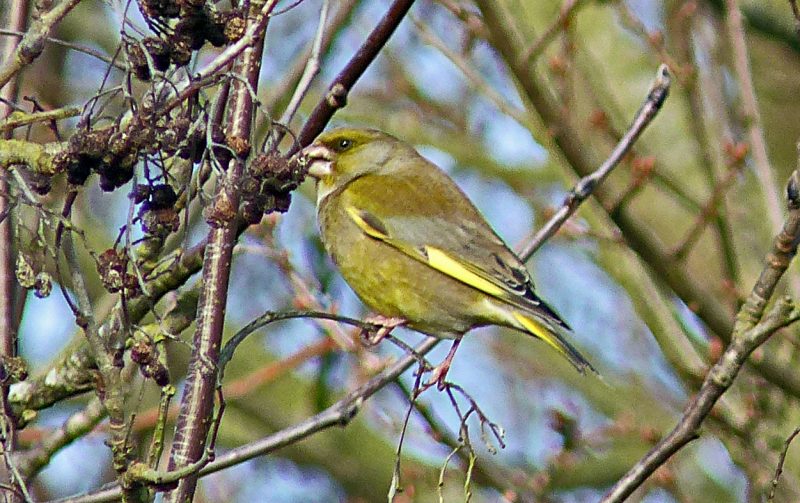 Beeston Common has won many awards over time for restoration, conservation and biodiversity.

“An English Nature SSSI Management award was given in 1996 in recognition of the 10 years of restoration by the Beeston Common Management Group. Also, as part of Sheringham in Bloom, the Common won several awards for conservation and biodiversity between 2005 and 2012 from the Anglia in Bloom team.”

A Beautiful Space for Everyone to Enjoy 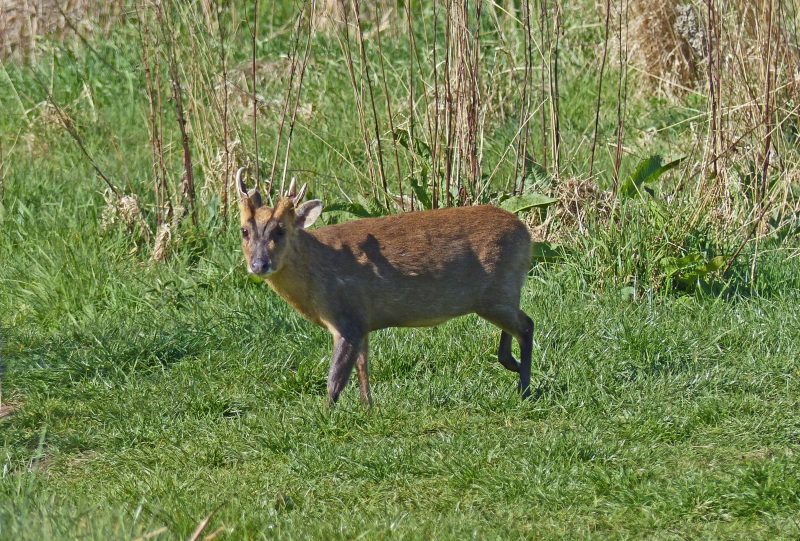 Whether you’re fascinated by nature, or you just fancy a walk in the countryside, Beeston Common offers idyllic surroundings for all outdoor enthusiasts.

“I would recommend Beeston Common to those who like to observe wildlife and flowers, due to its great variety. Also, to those who enjoy a stroll in the countryside, as it’s an oasis in a busy world. To listen to birdsong and the buzzing of insects in a tranquil setting is very relaxing.”

It’s free to park and visit the site. There isn’t a designated car park, so the best place to park is in a layby on the A149.

As Beeston Common is conserved and protected, visitors are asked to enjoy the area respectfully. Leave nothing but footprints, take nothing but photographs and kill nothing but time.

Dogs are more than welcome on the Common, but please make sure they are kept on their leads or under close control, and that they are picked up after. There are three dog bins located around the site.

It’s worth noting that Adders, the UK’s only poisonous snakes inhabit the area. However, if left undisturbed they are unlikely to cause any harm. 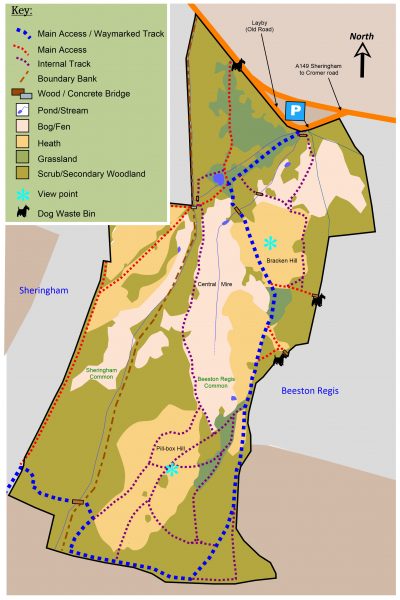 Visitors can find the Common just to the east of Sheringham, and south of the A149 Sheringham to Cromer Road. Location maps can be found on the website.

Beeston Common is a 24-minute drive from The Blakeney Cottage Company HQ.